What topics discussed in this chapter?

In November 1947 the United Nations partitioned the territory of the British Mandate of Palestine according to demographic considerations and on the basis that each ethnic group should have land to develop and attract future immigrants.

The British Mandate included 120,000 km2, but in 1922 England gave away 76.5% of Palestine for the creation of a first Arab state called Jordan. The Jews received 55% of the remaining 23.5% of the land where they were the majority and where they owned land. The Jews accepted their territory despite enormous difficulties. The Arabs did not accept the partition and declared their intention to annihilate the Jews.

We can divide this conflict into two parts. The first part begins after the partition of Palestine at the UN (29/11/1947) until the Declaration of Independence of Israel (14/5/1948), a period during which the Arabs of the British Mandate attack the Jews in a kind of civil war. The second part begins with the invasion of six Arab armies eager to destroy the newborn Jewish state. On both occasions the aggressors were the same: the Arabs.

During the war, on April 9, 1948, there was a battle in the village of Dir Yassin, where 107 civilians and 13 Arab soldiers were killed, mainly because of the use of civilians as human shields and because of an accident in a truck carrying a loudspeaker (from the Etzel-Leji), which was intended to warn civilians to flee but fell into a ditch. This was used to call for Arab relief.

After being attacked, Israel added 5,700 square kilometers to what had been assigned to it by partition. At the end of the war, the State of Israel extended over 20,770 square kilometers, which is 77% of the post-1922 Palestinian Mandate (about 27,000 square kilometers) and 17.30% of the original land of Palestine (including Jordan). 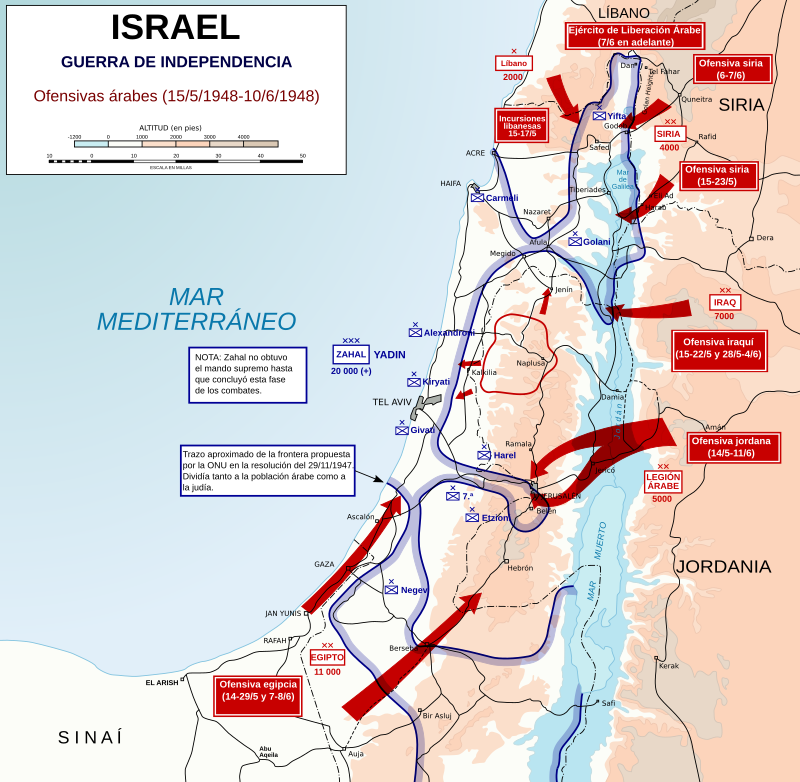 What is Declaration 181 of the United Nations General Assembly (1947)?

Was the UN territorial partition of Mandatory Palestine (1947) just?

How did the 1948 Arab-Israeli war begin and develop?

What is Plan Dalet during the War of Independence?

What happened at Dir Yassin and why has it become part of the Palestinian mystique?